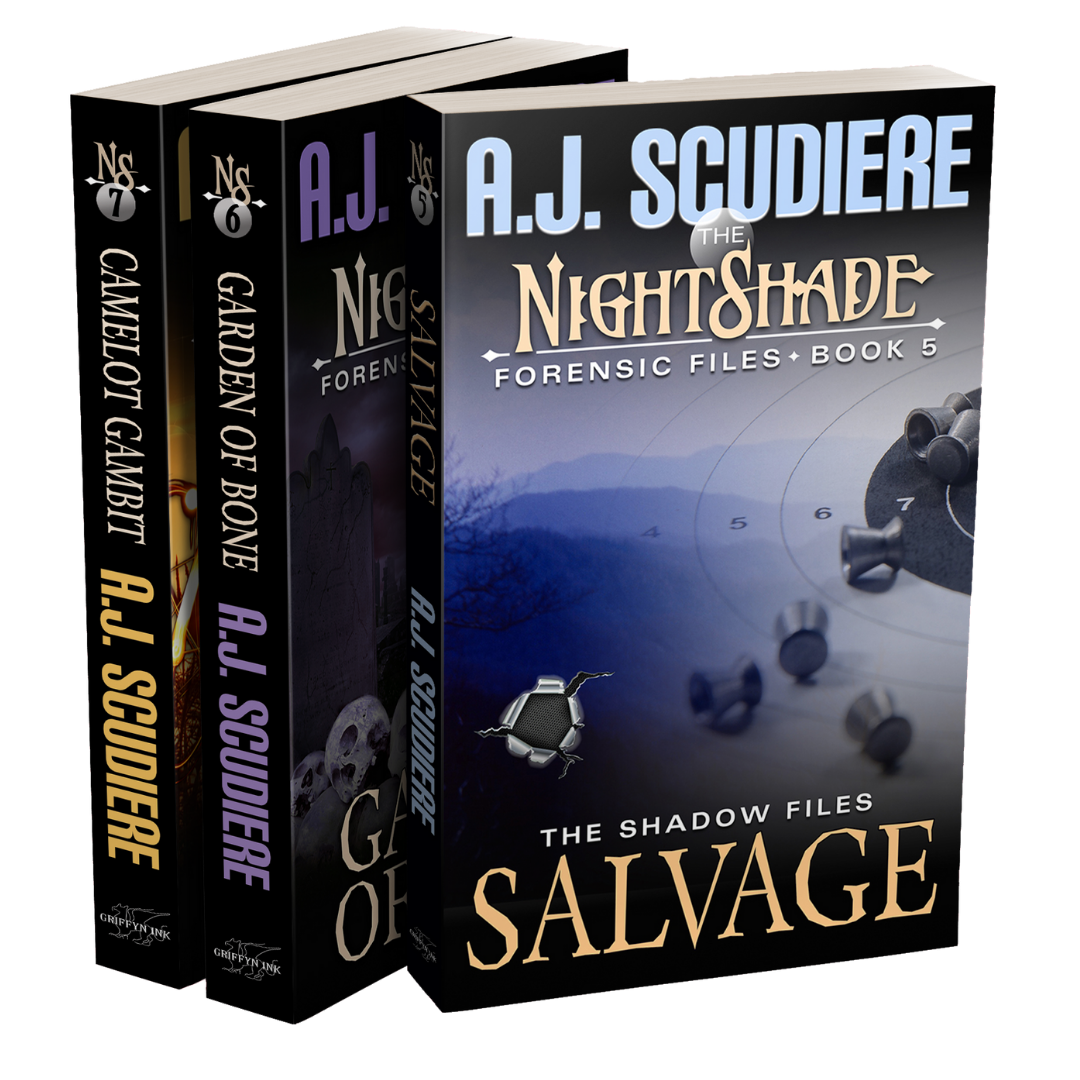 Huge savings off the individual book cost
These nail-biters will have you on the edge of your seat.
Vol 2 – Books 5, 6, and 7

Former marine turned Private Investigator, Walter Reed, has been given yet another strange and amazing opportunity: to become an agent with the FBI’s NightShade division. Though confident her training will make Quantico a cake walk—even with only one leg—Walter is discovering her shot at a new career has disaster written all over it. Her first hurdle? Walter doesn’t graduate training if her new partner GJ Janson doesn’t graduate, too…
After previously being arrested by the FBI, GJ Janson hopes to redeem herself with the chance to become an agent. Unfortunately, her snooping around her grandfather’s laboratory reveals he’s been hiding strange skeletons—with strikingly similar anomalies to those she notices in her friend Donovan. When a weekend visit to her grandfather’s lab yields a fresh body, GJ goes into investigation mode. But the body is that of a fellow NightShade agent, and Walter and GJ quickly realize that nothing in NightShade is what it seems—not the case, the other agents, nor even their job descriptions.
Only one thing is clear: the killer is coming after them next. And they suspect it’s someone GJ knows.

FBI Agent Eleri Eames was there the day her sister disappeared at eight years old. However, Eleri is the only one who knows that her sister is already dead and has been for quite some time. When a skeleton is unearthed in New Orleans, Eleri is convinced it belongs to Emmaline. The age and ancestry of the remains are a match, and there’s something telling Eleri that New Orleans is the place where her sister lived and died.
As Eleri hunts for answers, demons—old and new—begin following her. The Lobomau have been entering the city in ever-increasing numbers, and that might just have something to do with the Dauphine sisters and their long family history of witchcraft and voodoo. Eleri desperately needs her partner Donovan on this case with her, but can he risk his own job to help her?
Eleri’s ancestry may have imbued her with some powers, but compared to her own great-grandmother and the Dauphines, she’s untrained and untested at best. When the bones turn out not to belong to her sister, Eleri has to ask how a case so similar to Emmaline’s even exists…and is it an arrow pointed to her own twisted family history?

Can Eleri and Donovan outsmart a killer who leaves no evidence behind or even a discernable cause of death? How will they track down someone who is more intelligent than both of them together?
Curie, Nebraska was designed as a research haven for the ultra-intelligent. In fact, applicants must pass a rigorous IQ test before they can call the strange town home. Nearly every resident—including several child geniuses—is suspect and no one is safe. Going undercover as the new neighbors leaves the agents struggling to find even the most basic clues.
Eleri and Donovan can barely maintain their false identities against their overly-curious and stunningly intelligent new friends, let alone solve a murder. Can they figure it out before the next body turns up? Or has the killer already found them…