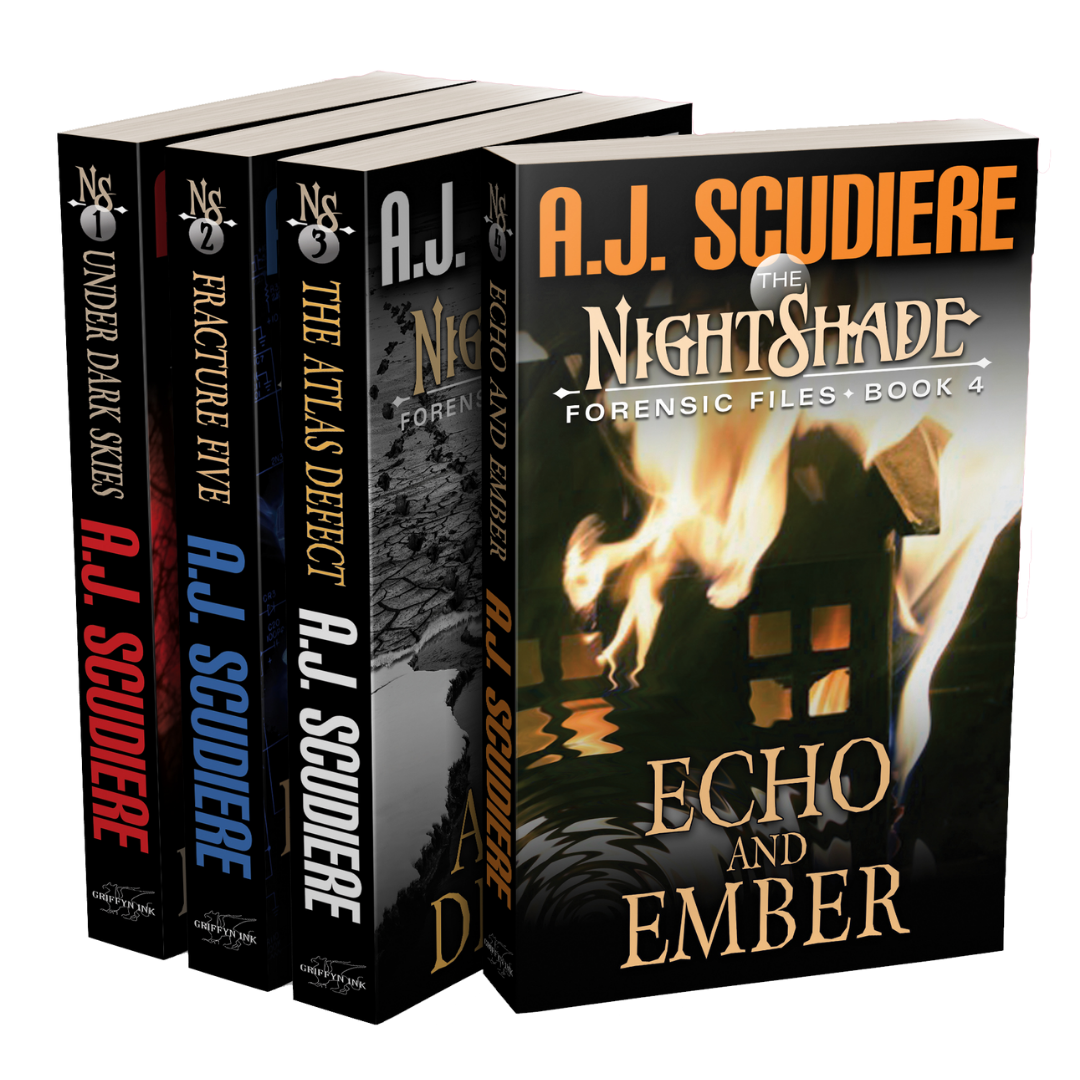 Huge savings off the individual book cost
These nail-biters will have you on the edge of your seat.
Vol 1 includes books 1- 4

Eleri Eames didn’t think she’d ever be allowed to work for the FBI again, so the special FBI division of NightShade seems like an amazing opportunity. But all too soon, her chance to start over starts to disturb her.
When the FBI offers Donovan a chance to leave his job as a medical examiner and try his hand at something new, he takes a chance on the NightShade division. Somehow, he has to try to escape from his shadows, but can he trust Eleri with the truth?
Thrown together on their first case, Eleri and Donovan must deal with a charismatic cult leader and his true-believers. The cult is mixed up with several decade-old kidnapping cases and the missing daughter of a prominent FBI Agent. As Eleri and Donovan dig deeper, they discover that NightShade’s mysteries aren’t coincidence.

NightShade’s newest agents are in L.A. to bring down a burgeoning terrorist cell. To make things worse, it’s not just one terrorist cell, it’s two. Or is it three? There is little to go on, only links between missing Army munitions and a veteran named Cooper Rollins. With his special ops training and severe PTSD, it’s impossible to tell what kind of game Rollins is playing.
Eleri and Donovan will have to use their unique skills to stop the attack before it happens. But in the crowded city, there are too many people who might reveal what Donovan is if he dares to make the change. And Eleri is starting to show signs of powers she didn’t know she had, and can’t control. On the surface the cells seem unrelated, each with separate perpetrators and different motives. But they are all linked by Rollins and the very disturbing passcode:
“Fracture Five.”

When an odd human skeleton in Michigan’s Manistee-Huron National Forest triggers a NightShade investigation, Eleri and Donovan arrive to find it missing. But two other skeletons are a little too easily uncovered—each displays different anomalies that raise alarming questions.
The bones aren’t from the area or probably even the continent. A decades-old abandoned building doesn’t register on satellite images. Files detailing genetic experiments on children are even more disturbing, and most of the children are unaccounted for.
Who were the test subjects and where are the bodies?If the case itself wasn’t enough of a problem, someone is watching. Someone with a particular interest in Donovan’s own skeletal anomalies . . .

FBI agents Donovan and Eleri left their last case with a sense of unease. Unable to close the investigation, they’ve been thrown into their next assignment far too fast. A string of strange arson-based murders are just part of the trouble. Not only is former agent Wade de Gottardi on their team for this one, so are two other NightShade agents: Dana Brantley and Christina Pines. The problem is, Eleri is no longer the senior agent, Dana is.
Maybe their boss no longer trusts them, or maybe it s simply because four people have already died. Either way, Donovan and Eleri are no longer in control of the case as they hunt a serial killer who’s getting bolder with each success. While Eleri and Donovan are just getting their special skills in hand, Dana and Christina are more at ease with theirs. While Dana’s talents prove useful, Christina’s are frightening . . . and suspicious.