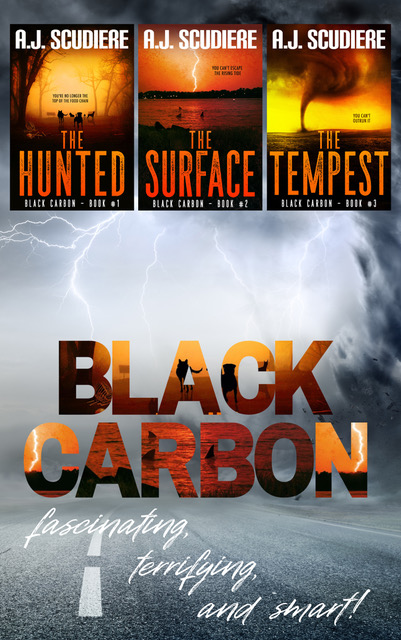 Includes the first 3 novels in the BLACK CARBON series: The Hunted, The Surface, The Tempest

When the rains came the first time and campus flooded, Cage thought it was a freak weather incident. Joule saw it for what it was—a warning. Life went back to normal when most of the water receded. But the standing puddles left behind weren’t normal. Something had laid eggs in it…

The first tornado was an anomaly. It cleared the land and bumped up the time scale on the job. But as everyone rushes to set up the new solar farm, they find that something has shifted… At first it was a series of small, unassuming whirlwinds, a nuisance more than a real concern. But soon the funnels get bigger and the winds get stronger, and there’s nowhere safe to hide.

When Joule and Cage get separated, the winds get even more dangerous. They’ve always had each other’s backs, but now they’ll have to survive on their own. Can they even help the people who live in the path of the fury? Maybe, if they can save themselves first.