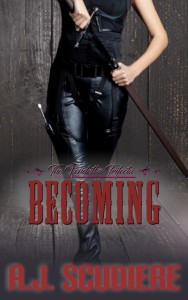 Even as she walked through the woods, cheap sneakers crunching leaves, she felt things sharpening inside. She was no longer Cyndy and never would be again. What, or who, she was becoming, she wasn’t sure, but she was changing.

There were twinges and tugs where injuries pulled at her. She’d picked a fight at school just for the purpose of getting bruises. That way no one would notice any new ones after tonight. The damage was both an asset and a liability. But she wouldn’t let it hurt.

In the dark, her vision had altered to the grayscale world that the night allowed. Even in the depth of night she could see the house was painted a sunny yellow. A big Victorian with white trim, it loomed over her.

The backyard stretched before her, beckoning her out, calling to her where she stood at the edge of the trees. Sliding back into the cover of the woods, she slipped what she needed out of her pockets. A black knit hat had been jammed into one, and she now forced her ponytail up under it. Several attempts were required to make it stay and all the while she was fighting with it she was cataloguing better options—a haircut, braids, hairspray—because this would not be the last time she had to do this.

Gloves came out next. Black leather, bought at a discount store, they were the singular most expensive item she owned. Even as cheap as she had gotten them, she’d had to save up. As painful as that had been—the waiting, the saving was of no concern to someone so single minded—it had probably been a good thing. She had accused Robert Listle of things, and had she done this a while ago, the act might have gotten traced back to her. A little time gave her an advantage. A bit of an alibi. Distance.

Her body as covered as possible, she slunk across the back yard. If any of the foster children living in the home saw her they didn’t sound any alarms. Someone slinking in to rob them was no worse than other nights, at best it was a diversion they wouldn’t have to pay for later.

Surprisingly, she wasn’t breathing heavily by the time she reached the house. She was calm enough to take a moment for silence, just in case someone did see her, or get worried about a shadow, or hear a noise and look out the window. She pushed into the bushes and waited until she counted to twenty. She leaned back against the wall, startled by the soft crackle. The wood was weak here. Clean and sparkling up where it showed, no one had forced the new coat of paint down here behind the bushes. Though the house had worn yellow for several layers, here it was chipping away, showing a dull coat of gray that had once been the house’s main color.

She knew this house. She’d been inside as a guest. And for the small memorial service that vile man had thrown for her sister, she’d checked the layout. She now crouched under the window to what she knew was his bedroom.

She stood abruptly, bringing her elbow up and behind her head to smash the window. In a fluid movement, she turned and grabbed the ledge above her using the brute strength she had developed in her arms to haul herself up.

The leather gloves protected her hands from the shattered glass edges. Mostly.

Even as she swung her leg over and into the room, she saw him coming awake. A simple looking monster, all the more lethal for his likeability, Robert Listle sat upright in bed.

He opened his mouth, a possibility she had not really accounted for. She had simply believed she’d be faster than him. Luckily, he’d been asleep and wasn’t really processing the fact that a person was coming through his window. Instinctively, he pulled the covers up, but he asked a gentle “What?”

She didn’t answer, just came all the way into the room as he was standing, a man naked but for his underwear. His eyes shifted at her, suddenly looking mean, and she got a glimpse of the way her sister had described him forcing his way into her room after dislodging the chair she’d shoved under the doorknob. Wendy hadn’t been the only foster kid he’d gone after. And she hadn’t been the last.

“What are you doing here, Cynthia?”

Her name was tainted just by passing his lips. She wondered if Wendy had felt the same way. But he’d formed the sentence fully, if not loudly enough to wake anyone else. He glared at her, a wayward child he intended to punish. The narrowed eyes pushed her into action.

Though he was much taller, she reached out for him. Grabbing his arm and tipping him off balance hadn’t really been the plan. She wasn’t as fluid as she’d always imagined she would be when she got here. The fist fight yesterday had all been calculated moves and factored hits. This was a mess. Her adrenaline had kicked in and she jerked harder than she intended.

He probably hadn’t expected her to grab him. He faltered toward her and as she stepped out of the way he teetered toward the broken window in the tiny room. His arm hit the glass where she had come through and he twisted away from her.

Still, he stood back up quickly, unexpectedly. Blood dripped from the fresh slice on his arm. “You bitch.”

This was the Robert Listle Wendy had told her about.

He stepped toward her and she stepped back. She didn’t want him going into the wall again, he needed to drop to the floor. So she put space between them. It was a mistake.

His hand flashed out, grabbing her neck and she jerked backward, instinctively away. It went against all her training, but her core reactions had taken over. It might have been okay, but his bed was behind her and she bumped it, tipped, and lost any control she might have gained.

He was on her then. Hatred glaring in his eyes as his other hand wrapped her throat with the  first. “You’re Wendy’s little sister, aren’t you?”

She couldn’t answer. Choking wasn’t a new sensation to her, but it never got less frightening. Her heart picked up pace, her breathing matching time as her limbs flailed and she saw stars begin to sparkle at the edge of her vision.

Her head felt heavy and she realized she was failing. For a moment, she let herself give up. The gray seeped in, reminding her how easy it would be to let go. Her mom and dad were gone. Wendy was gone now. The gray would be safe and simple.

“I should keep you.” He sneered through the clouds in her vision.

It was enough. She would not belong to him. Not to anyone. The gray was where Robert Listle lived. Not safe, not simple. She let her shoulders drop back and her eyes close as she worked without oxygen. His hands were at her throat, both of them.

She brought her arms up, swift and fierce, hands together. She jammed her fists through the space between his forearms, breaking his hold on her neck. Oxygen flowed in suddenly, replacing the gray with a busy high. But this time she was ready and she ignored the sensation. Even as he fell forward onto her, having lost the support of his arms, she jammed her knee upward making contact to his groin. It wasn’t painless on her knee, but it was worth it.

His muffled grunt told her she’d scored a hit.

Pulling in her legs and jamming her hips up and to the left, she used her best leverage to throw him off. One small fist managed to clip him in the jaw. It was probably pure luck she’d hit the golden spot and watched his head snap back and his eyes deaden for a second.

She wasted no time. She knew what she had come for. She rolled him away as best she could. There would be no fighting, sweating, or punching. Just one arm tight around his neck, the other bracing it to be sure the flat of her forearm went across his windpipe, crushing it rather than just locking his head in place.

He thrashed but she was behind him. Rober Listle reared up off the bed but stumbled. The fourteen-year-old girl on his back and around his neck more trouble that he could handle. His legs were hampered by the fact that she was shorter and he couldn’t stand to get any proper aim or force. He swung backward with heavy elbows. Several blows landed, but she suffered through and held on. None were strong enough to break the grip held steady by the lingering memory of her sister’s death.

So she counted to one hundred after he stopped flailing and she listened for sounds in the house, not hearing anything of importance. When at last she released him and let him slide, leaden, to the floor, she felt satisfaction.

Her brain then snapped back into place.

She had a job to do here. Listle was dead, that had been most important. But if she was going to get to Jansen and Leopld she had to make certain that none of this pointed back to her.

She pulled drawers and looked under socks, shifted the mattress as though looking for something. Twice she found small wads of cash, which she pocketed with a clean conscience.

Then cautiously, she went to the bedroom door. Slowly she opened it, venturing into the hall, trying to keep her face hidden lest one of the foster kids see her and get the idea to call the cops—even though she’d just stopped the horrors they all knew were happening.

Quickly, she messed up the living room and kitchen only at the last minute tipping lamps and breaking the glass in the back door as she went out it. She stuck to the stepping stones, not wanting to leave shoe imprints, then dove straight for the woods, never looking back to check if she’d been seen.

Peeling the hat and gloves, she used her precious pocket space for the small folds of bills leaving her gear clutched in her hand. It wouldn’t do to drop them back here and have them found. She walked off the adrenaline, through the woods and around in circles, and still she didn’t hear sirens. Good.

Later, she changed into the clothes she’d left behind a rock on the other side of the trees. Bagging the ones she’d worn into Listle’s house, she hauled them for a while, eventually pushing them under other bags in a dumpster she passed on the way home.

No one seemed to be out at this hour. For that she was grateful.

Her feet were tired. The twinges in her arms had advanced to actual pain. But the money in her pockets was a badge, a prize. The one thing she had taken from Listle’s house besides her self.

Just beyond the foster home where she stayed, she stopped. She breathed in deep against the weight of satisfaction and the knowledge of what she had done. Of what she would do again. But better next time.

I hope you enjoyed this and thank you so much for reading . . .  Vengeance starts five years later.

Get it FREE on all e-readers. 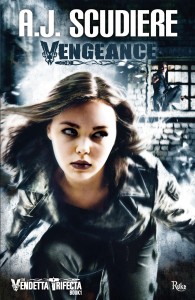 OR get the better deal and get the whole set here . . . 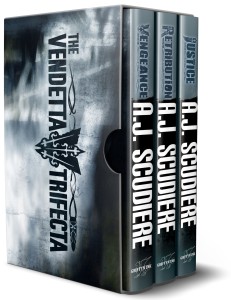