Last September, my son and I took a book research/read trip to Nebraska. I'd never been, and it was the only place in the US that I had found that was truly suitable to buy up land and build a city (rail lines, fuel, cheap land, plenty of it, etc.) So we spent a handful of days scoping the place out and finding the perfect location for my fictional town of Curie (he and I named it together, and you can thank him for the street names!) The base story of the Camelot Gambit has existed in my head for about fifteen years. It's a crazy feeling to release something that existed only in my own imagination into the wild--especially after having lived with it so long.

We stayed in a little air bnb because I wanted to be in a "normal" neighborhood. We ate only at local diners, chains, and one-off burger joints. This is somewhere in the realm of my tenth book research trip. (New Orlean/Thibodeaux, West Columbia SC for firefighter ride along, Smyrna GA for police ridealong, etc etc) And it was phenomenal. I met up with an old friend (Jennifer Belk White) who helped us sort out what is "Nebraska"--because even though almost all the residents of my fictional town were imports, the place must bring it's culture in some way. I wanted to be sure I got Nebraska right.

For those of you who read Resonance... that book was set in part in Oak Ridge, TN, the town where I grew up. It's a real planned city. It has now been around long enough to have some organic properties (sprawl, urban development etc) but is still at its heart a "designed town." The streets are alphabetical from one end of town to the other! For decades we share the honor of "highest PhDs per capita" with Los Alamos (our sister "town that built the bomb" city.) Having grown up that way, it was fun to design my own city and to know what it means to live in one. It's an abnormal experience that my friends and I didn't fully understand until we got to college and moved away.

All of that knowledge is in this book. I love this story. It has been held close to my heart for years. And it's the perfect lead in to Dead Tide, the next NightShade book.
*Keep your eyes on the kids in this story. Two of them will return to lead my new series Black Carbon. The first book in that series will be available on Aug 6th.

Hey y'all! Garden of Bone is almost here! It's out on Nov 8th. But before then I'll start work on book 7, the Camelot Gambit. In this one Eleri and Donovan are undercover in a designed city. The city's founder had decided that he wants a place just for him, and he invites anyone who can pass his test to come live there. Only a city with only one kind of people is problematic at best...and when there's a murder in a town full of people too smart to leave behind fingerprints, can Eleri and Donovan figure it out without revealing who and what they are?
I'm off to Nebraska next week to do some early recon on the area! I'll post pictures in my newsletter. If you're not already on it, just click one of the "Become a Renegade" links on this site and you'll see the pics and hear the stories before they wind up in the book!

Happy reading and I hope you enjoy Garden of Bone!

There’s a new book coming out in the NightShade Forensic Files. I know I said Garden of Bone would be next (and it will still come out at the promised time!) but this one needed to be told. There are several things that will happen over the next handful of books and, aside from being a fantastic ride in its own right, this story gets you what you need to follow that trail. Also, it brings back Walter Reed (a perennial favorite!) Our other lead in this story is GJ. You might remember her from The Atlas Defect. Her family history is as screwed up as Eleri’s but for all different reasons. You’ll start to get a glimpse into that with this new book, Salvage. And you’ll get some new info about the Lobomau before they come back with a vengeance.

This is the first book of the NightShade Shadow Files–it’s still part of the series, but not predominantly an Eleri and Donovan story. No worries, they are definitely in it. Aren’t they always in it up to their eyeballs? But the Shadow Files will allow us to get to see NightShade from a wider scope and it lets you, the reader, to see some of your other favorite characters up close and personal.

Salvage is out July 12th, 2018. It’s book 5 of the NightShade Forensic Files and Garden of Bone will be book 6, out later this year.  As always, happy reading and I hope you love this one as much as I do! I had so much fun putting Walter and GJ together in Quantico. This book practically wrote itself! There will be other Shadow Files books coming as part of the series. And stay safe from any Lobomau you run into!

Hello Renegades — The next AJ book out will actually be TWO books. They will have the same title (FORTUNE) but be sub-labeled “(red)” and “(grey).”

Here’s a rough draft of the one line teaser from the front of the book:

(red) When Fortune Flores was eight years old, she went missing for ten days. Those ten days will change everything Mia thought she knew.

(grey) When Fortune Flores was eight years old, she went missing for ten days. Those ten days will change everything Rafe thought he knew.

The two books will tell the same story of Fortune’s disappearance and subsequent return from two different sides of the story. (So neither is a Prequel or a Sequel. In fact, we’ve decided they are to be called “Equels.”)

FORTUNE–an eight year old girl has been kidnapped from her front yard. Now, throw out everything you thought you knew about the girl, the parents, the kidnapper, and more.

You love a good mystery? The first one is deciding which book to start with. Your choice.

We just wrapped up another great Southern Festival of Books weekend. It was nice to be back after a break last year for another event that coincided. Our booth this year had authors from 3 states and we had an amazing time despite getting rained out later Sunday afternoon. If we met there for the first time, then Welcome!

ECHO AND EMBER releases in just a handful of days!

After that, the next book will not be a NightShade book . . . I know a lot of you want the next installment. You’ll get it! Promise.

I get book ideas from so many places that I sometimes don’t remember where the idea came from at all. But this one, I dreamed. All the way through. The whole story. I had this dream in 10th grade and I remember it, in its entirety to this day. It’s time to write the story of FORTUNE. Look for FORTUNE to be out next spring (I hope.) And grab ECHO AND EMBER to keep you until then. Also due next year: GARDEN OF BONE – NightShade book 5. You’ve been waiting for Eleri to find out more about Emmaline and Donovan to find out more about his past . . .

Keep your eyes here for more information as we go!

Welcome to AJ’s World. It’s a little weird here. I love science and data–literally, when I panic about anything, I talk myself out of it with statistics. I love a good puzzle (probably why I love science) and I want to solve it. My family supports me and my writing habit, but I’m not treated like royalty at all. This is what my sister did with my book: 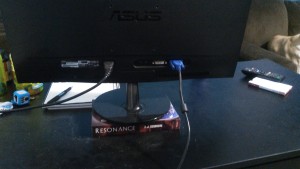 (She says it’s damaged, so it’s not an insult. Also, it was the right height.)

I’ll post here what I’m working on. Where I’ll be and more.

So for right now, the next stop is the Southern Festival of Books in Nashville. OCT 13th-15th. Almost all the Griffyn Ink authors will be there with me along with a few others. Come on by and get an advanced copy of ECHO AND EMBER. Some of the other authors will have advanced copies of their books as well! Read up on the Southern Festival of Books here:

Thanks for subscribing! Please check your email for further instructions.